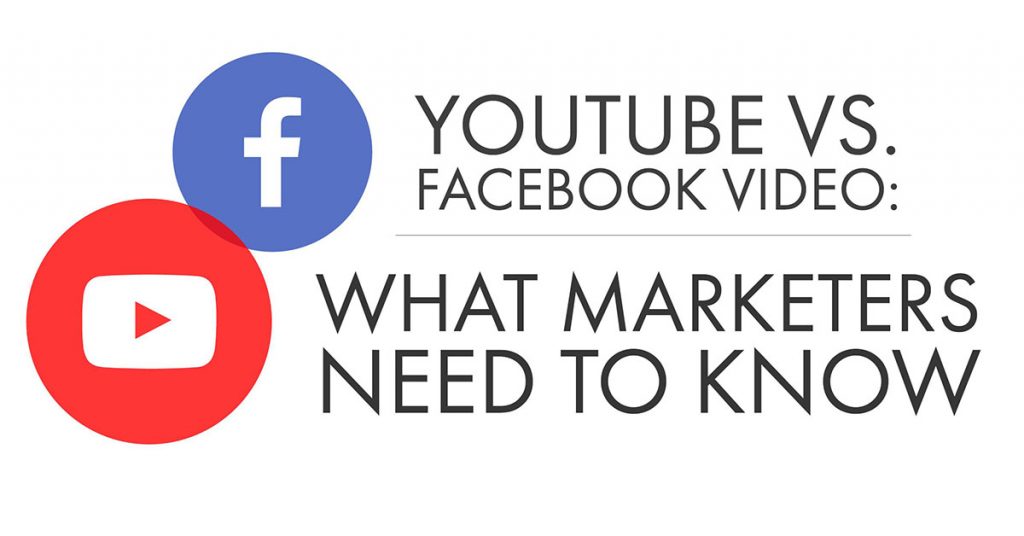 Last week we explored the importance of customizing your videos for different platforms, but to do so effectively, you need to know how each platform differs.

Fortunately, they also provide a perfect example of just how different two platforms can be.

The context couldn't be more different; when people go to YouTube, they're usually going there to do something specific. But on Facebook, people just scroll through the newsfeed until something catches their eye.

YouTube is the world's second largest search engine, while your Facebook videos disappear from the newsfeed after a couple days.

YouTube doesn't consider autoplays as "views," whereas Facebook videos autoplay in the newsfeed (without sound) and record views after 3 seconds.

It's difficult to imagine how these video platforms could be any more different.

And yet, most marketers continue to treat the platforms like they're the same.

Misunderstandings about the key differences have even confused Facebook!

In case you missed it, there was a recent controversy around Facebook's average watch time metric.

In short, their own metric didn't account for how Facebook records views differently, which made their average watch times appear inflated.

You can watch that video below:

So if even Facebook itself is making mistakes about the differences between the platforms and how metrics should be calculated differently, I think it's safe to assume that marketers could use a little more clarity on the key differences.

Fortunately, Stronz shared a video earlier this week highlighting some of the key differences between Facebook and YouTube. Alright, now that you know some of the ways that Facebook and YouTube handle videos differently, I'd like to break down what that means for you as a marketer.

When people go to Facebook, they're looking to stumble across something interesting in their feed. It's a distraction-rich environment, filled with shiny objects.

While YouTube also offers plenty of distractions, users ultimately have to choose which videos to watch. So theoretically, YouTube users have longer attention spans.

But there's more to it than just attention span. Both platforms use an algorithm that dictates how much exposure your video will ultimately get.

Facebook rewards shorter videos, because people are more likely to like and share a short video than a long one. That's just a factor of how many people actually watched the video to completion. As a result of that kind of engagement, your Facebook video will get increased exposure in the newsfeed.

YouTube, on the other hand, prioritizes "watch time," or amount of time people spend on YouTube after watching your video. That means longer videos will outperform shorter videos in YouTube's search and suggested video algorithms, as long as they're engaging enough for viewers.

Topic selection is another important difference between the platforms.

On YouTube, you should be creating tutorials, how-to's, and other "in-depth" content that offers a lot of value. This type of content is what people search for on YouTube, so you want to be providing it to help your videos rank in YouTube search results.

Facebook, however, isn't the right environment for in-depth content. Here it makes more sense to share essential concepts, answer FAQs, and other simple ideas that can be communicated quickly and don't need to be followed along with.

I'm walking into dangerous territory now, because there are so many different styles of video that it would take a book to give this point a fully-nuanced explanation. But suffice it to say that the dominant style on YouTube is a person talking directly to camera and encouraging interaction with the video player by pointing out buttons and annotations.

Not only do those in-video features not exist on Facebook, but the talking head style doesn't make a ton of sense because Facebook videos autoplay without sound.

Captions can help you when you're repurposing videos onto Facebook (like we do), but it's far from ideal because now you're asking your viewers to read (kinda defeats the purpose, right?).

So in a perfect world, you'd use some kind of visual cue to encourage Facebook video viewers to click for sound.

Key Difference: The talking head videos you see on YouTube simply don't perform as well on Facebook because of the silent autoplay. With Facebook you need a visual cue to encourage people to click for sound, or use a video style that doesn't require sound at all.

Key Difference: Facebook doesn't have subscribers or in-video links to other videos. Make sure your CTA slides at the end of your video are customized to the platform you plan to share your video on.

The distinction may be subtle, but it's significant.

Your YouTube videos are primarily found through searches on YouTube and Google, or as suggestions from YouTube based on the video you're currently watching. That means your videos can have a very long shelf-life and drive views and leads for potentially years into the future.

Conversely, your Facebook videos are initially limited because they only get exposed to a small percentage of your Facebook fans (<10%). However, if that video gets strong engagement, then you could potentially get a large amount of exposure with your existing audience, as well as some of their friends.

Again, Facebook videos autoplay in the newsfeed and record views every time someone dwells with the video on screen for more than 3 seconds. That means that a ton of the views you're getting aren't actual views. Maybe someone was looking at the meme above or below your video, resulting in an accidental view.

With YouTube, your views are all authentic, and therefore, more valuable. When someone watches your video on YouTube, it means they chose to watch it.

From an analytics and engagement rate perspective, you should expect better results on your YouTube videos because there isn't a ton of data pollution from inadvertent "views."

One example that comes up a lot with our clients is the average audience retention, or the percentage of the video that is viewed by an average viewer. On YouTube, we typically see retention rates above 60%, while Facebook viewers typically watch under 15%.

Because of they measure engagement so differently, you should never compare the two or view one platform as objectively better based on metrics like this.

However, that doesn't mean YouTube is the best choice for every business. And ideally, you don't need to choose between them.

But if you did have to choose just one, YouTube is the better long-term play.

Did I miss anything?

So there you have it, 7 key differences between Facebook and YouTube videos and what they mean for marketers.

Do you have other important distinctions that I've missed?

If so, let us know in the comments below!