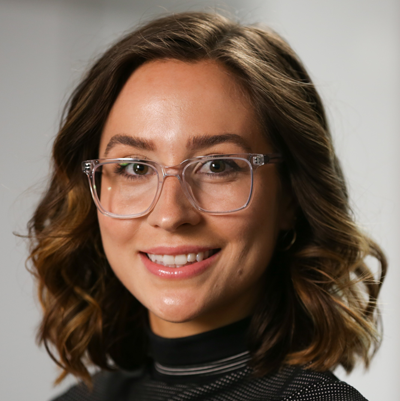 Weslie got her first taste of producer life at the young age of 13 when she received her first video camera. She quickly tapped into her artistic side, telling her friends what to say and where to stand, and she knew that was what she wanted to do when she grew up.

Weslie, who graduated from ASU's Walter Cronkite School of Journalism and Mass Communication in 2014 has worked as a producer in a number of capacities including a morning news show and a music festival documentary. She also took an unknown entertainment station with very little presence and not only defined their branding and daily programming, but also developed a weekly show and an annual special that was nominated for a Rocky Mountain Emmy.

Weslie’s diverse background and her finite attention to detail is a great asset to our team. Her ability to develop major creative ideas, adhere to restrictions, and bounce between multiple mediums has helped create compelling videos that are on target and on time. She recently won a much-deserved 2022 Telly Award for a video she produced at WireBuzz.

Outside of work, Weslie enjoys restoring vintage furniture, spending time with her friends and family, and exploring the great outdoors hiking, kayaking, and swimming.

“We’re almost there and nowhere near it. All that matters is we’re going” – Lorelai Gilmore
Clean & Elegant
Fully Responsive
← Back to Team page